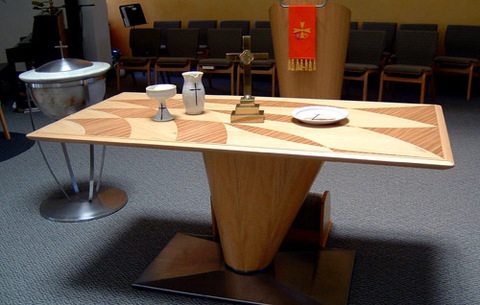 Awhile ago at the last Princeton Emergent Cohort we had, we talked about the idea of belonging preceding believing. This is an idea that has been tossed around between many folks, but I first encountered it in Brian McLaren’s book More Ready Than You Realize. I think it is a powerful idea that people today, especially with the rise of the commitment to community; that people today might be ‘converted’ first to a community, to a sense of belonging, and then later to a sense of believing. This conversation eventually led to the question of the sacraments, and how that would work out. I wrote, in a previous post about ‘fencing the table‘, about some initial thoughts about communion and who should be able to participate.

It seems to me that such a prayer – such a focus on the presence and work of the Spirit, almost necessitates an open table. It’s not about the participant, it’s not about the presider – it’s about God, Christ and the Spirit – so why should we be saying who gets to partake and who doesn’t?

I know that if/when I preside over Communion – I will certainly not say that the Lord’s Supper is only for baptized believers. It’s most likely that I’ll simply say that “All are welcome” and really trust the epiclesis that I pray that it IS all about God and the Spirit’s work, and not up to the faith or participation or worthiness of the person taking part in the sacrament. Wesley believed that the eucharist should be used as a form of evangelism – he commonly welcomed all people, believers and non-believers to the table to partake. Perhaps us Presbyterians may need to become a bit more Wesleyan, because it seems to me if we’re going to emphasize the epiclesis so much, as I think it should be emphasized, then we should also be ‘open’ to the idea of an open communion table.

« Sexual Revelation
Last night and the drive away… »